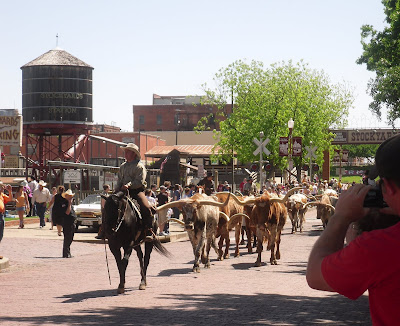 We recently took a trip to the Fort Worth Stockyards to find our inner cowboy. Grandpa and Grandma Muffett were in town from Oregon, and we wanted to give them a taste of Texas history.  Not really knowing exactly what to expect, we rode into town on our old pony "GMC," and boy did we have a great time!  When we first arrived we had a chance to watch the "Fort Worth Herd" mosey through town.  They make this walk twice daily and seemed rather bored with it.  The cowboys riding with them (there were more than you can see from the picture) were definitely on the alert and making sure to keep everyone out of possible harms way. 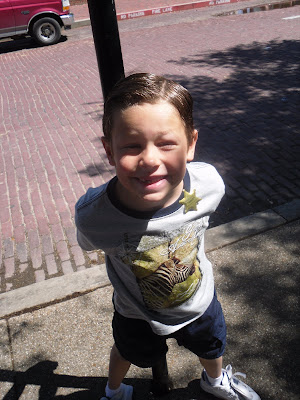 Harrison and Ryder got some free souvenir FW sheriff badges from the Visitors Center.  You know how they like to keep the peace and all.
Next we visited the Stockyards Museum - "free" with a mandatory $2 donation per person.  While inside we found this cool tub the cowboys used to bathe in once or twice a year. 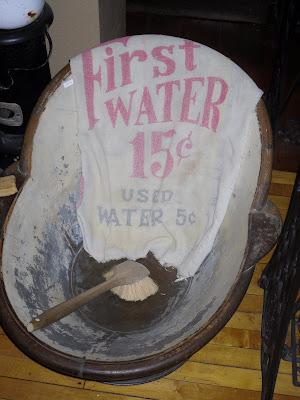 I'd definitely spend the extra dime for my bath!!
Then we took a look at what's left of the old Stockyards.  It's almost incomprehensible how much livestock used to pass through there! 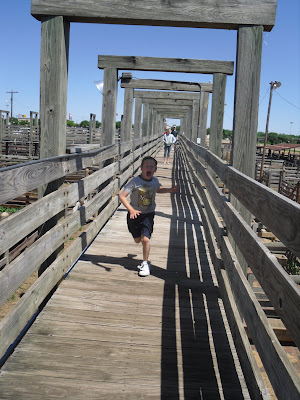 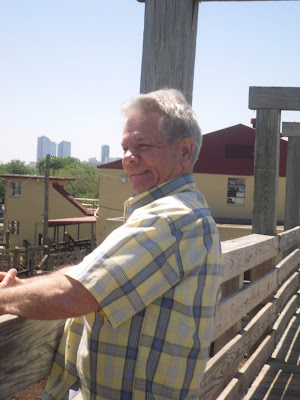 Looks like Grandpa enjoyed the view from above a lot more than Ryder!
Next we took the kids to the Cowtown Maze.  For $5 per kid they get lost inside (I mean really lost) for about 15-20 minutes, or however long it takes them to find the letters in the word MAZE, punch their card and get out. They win a fabulous prize such as Chinese finger cuffs when they're done.  The parents get to stand on a platform overlooking the maze and shout out instructions to their increasingly frustrated offspring.  Boy was it fun! 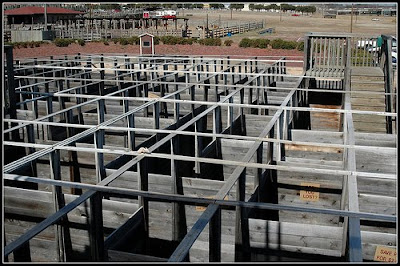 Then Nicole and Ryder rode the mechanical bull. 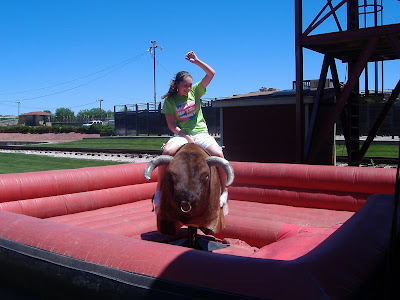 Nicole had lots of fun! 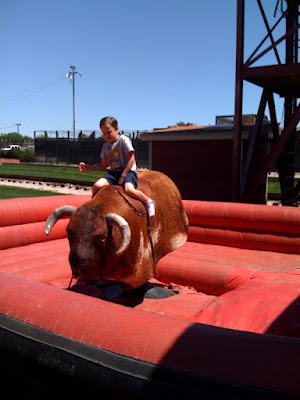 Ryder maybe not so much. . . but he held on.
Of course grandma found herself in a bit of a pickle - 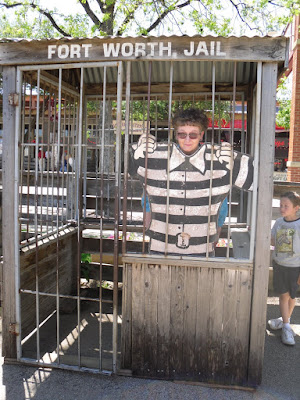 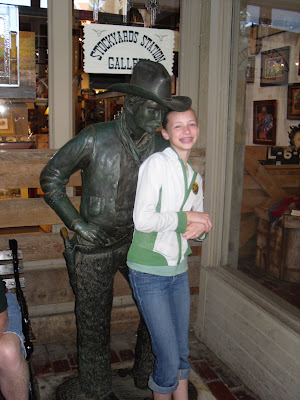 And Darren met a celebrity. 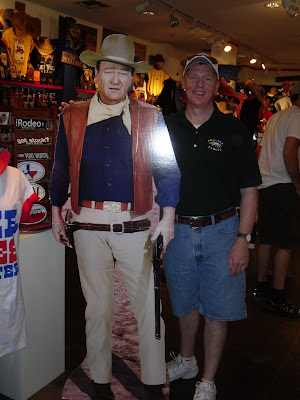 All in all it was a wonderful day, even though we never had that order of deep fried pickles like we had planned. I'll never forget Harrison and Ryder getting to ride Big Jake, the most patient longhorn in all of Texas. 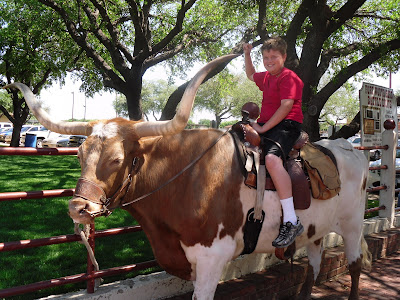 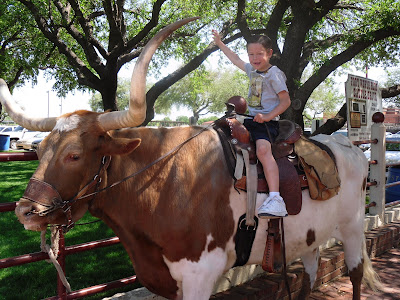 Oh for heavens sake! Ok so long story short, (follow me on this one)...I go into "Jo's" blog (because she commented on my blog today) it takes me into "Yumz" blog which takes me to another blogspot "6 Rommneys in Texas" so I head over to that blog...I peruse the pictures, I see a few familiar faces...I think its Win and Hjordis Muffett but think to myself NAW, can't be, this is Texas and they live in Oregon.
Then I go to sign up as a "FOLLOWER" on this blog and there is one lone FOLLOWER already there, I click on it to see who it is...its Hjordis...I gasp, Hjordis...IT IS MY NEXT DOOR NEIGHBOR! Then it hits me...you are Heidi Muffett...what a small world!
I am Mark Beaudry's wife Terry (or better known as "La Bella Vie" and I live in the house next to your mom and dad's!
So HI there from me...small world huh?!
Terry
PS who's "Jo"? I signed up to FOLLOW her too...
whew long winded but "long and big" are always OK in Texas from what I hear:)

This is such a fun comment!! It sure is a small world - even in Texas. Yes, I am Win and Hjordis' daughter. And "Jo" happens to be my mother. We both contribute to our recipe blog YumzTheWord. I was just talking to my mom about a darling little apron which I got my daughter, who loves to bake, for her 13th birthday. Mom tells me you have a cute section about aprons on your blog, so I'm headed over there when I get a moment!
So Hey y'all from the Texas Romneys. Tell Mark "hi" for me.

Heidi thanks for the comment on my blog and solving the mystery. Of course I remember you and your family from our days in Oregon. I love that we've made this connection, thanks to you connecting with Trevlyn on Facebook. I'll be peeking in on your blogs often. Please give your mom greeting from me.

Wow, Terry told me about the "meeting" on the blogs, I'm Mark's mother. Anyway I'm commenting because you mentioned, aprons. The post that Terry did on aprons, actually she did two, was about a apron & tea luncheon that my FCE group did and was held at the Clark's Grange building. I'll tell you aprons are quite the thing to collect. Bye Betty Beaudry

Hi Betty - sounds like a fun event at the Clarke's Grange! I haven't been inside that building since it was "remodeled," and I think that happened quite a few years ago! The aprons Terry posted pictures of were adorable, I'm glad she posted them even though she doubted her photography skills!